Leaving  the hustle and bustle of Rome, we zoomed down the highway for the the doorway to the south…the Amalfi Coast!  We rented a car and Ron had the time of his life hugging the narrow and blind curves of the coastal road to Positano and our next home…a fisherman’s cottage, carved out of the side of the rock!

The string of small towns along the Amalfi coast seem to have grown organically, curving up the side of the rock, with roads, gardens and staircases that were carved out of the mountain during an ancient time with no trucks, jack hammers or cranes.  The fisherman’s cottage I found for us to live in on line was in the  town of Priano.  Located between Positano and the town of Amalfi, this small fishing village was the real deal! 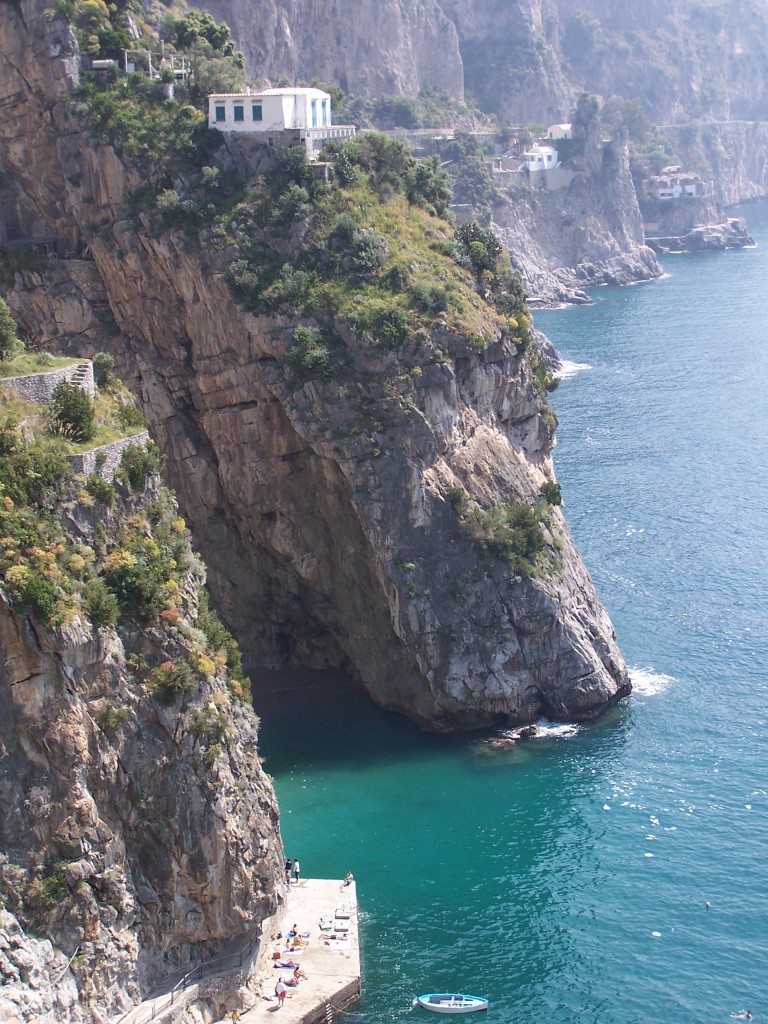 From the deck of our Fisherman’sCottage-image via Irene Turner

The rental agent assured me via phone, that it was easier to get to the house from the top road with only  10 stairs,  then to climb up from the main street with 120 stairs.  Luigi, the young man who took us there just shrugged, then drove us by vespa to the spot; or rather me and the luggage by vespa, while Ron walked behind.  Well…I guess it was easier to get to from the top as we walked down rather then up stairs with our luggage.  But anyway you look at it, it took us 160 stairs to reach our fabulous cottage going down; and 169 steps coming up from the main road…we counted! 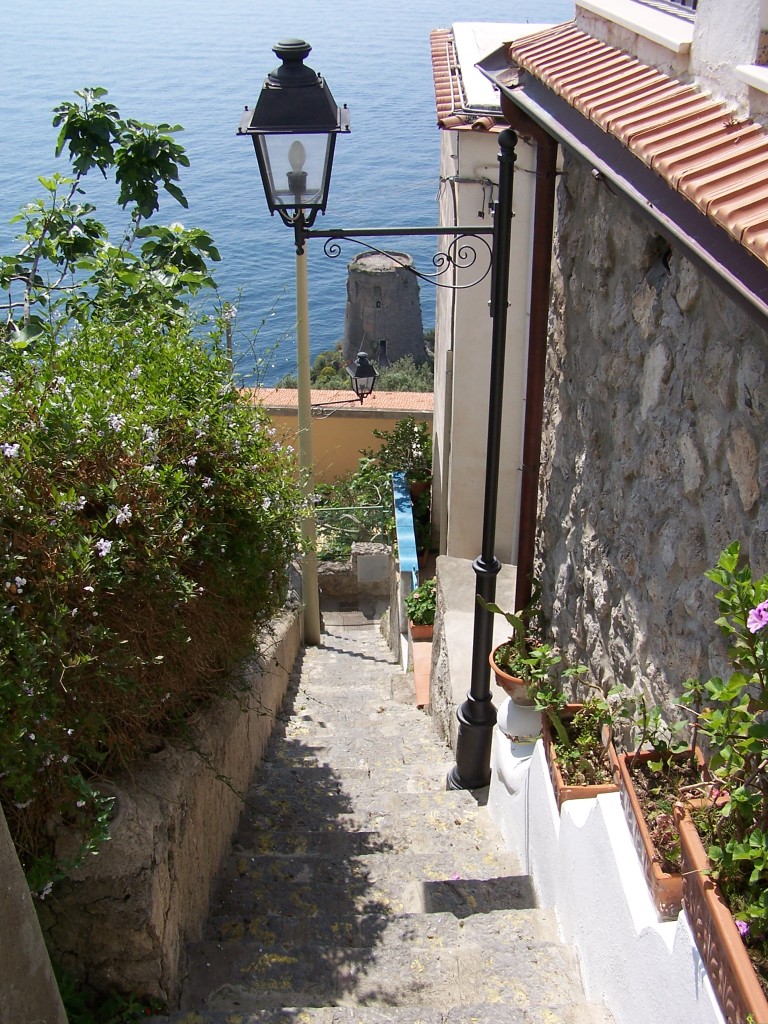 It was worth every step.  If you can’t tell by now, being a designer, the place we stay and the complete experience of local life is as important to me as where we go.   While perhaps not the most comfortably furnished (by American standards) it was incredibly quaint and again, transported us to a different place and time.  The back wall of the two stories in the cottage was the sheared rock of the cliff side.  The terrazzo seemed to cantilever out over the other cottages below us and the turquoise water, with a view south of the roads and terraced gardens that lead to the town of Amalfi. 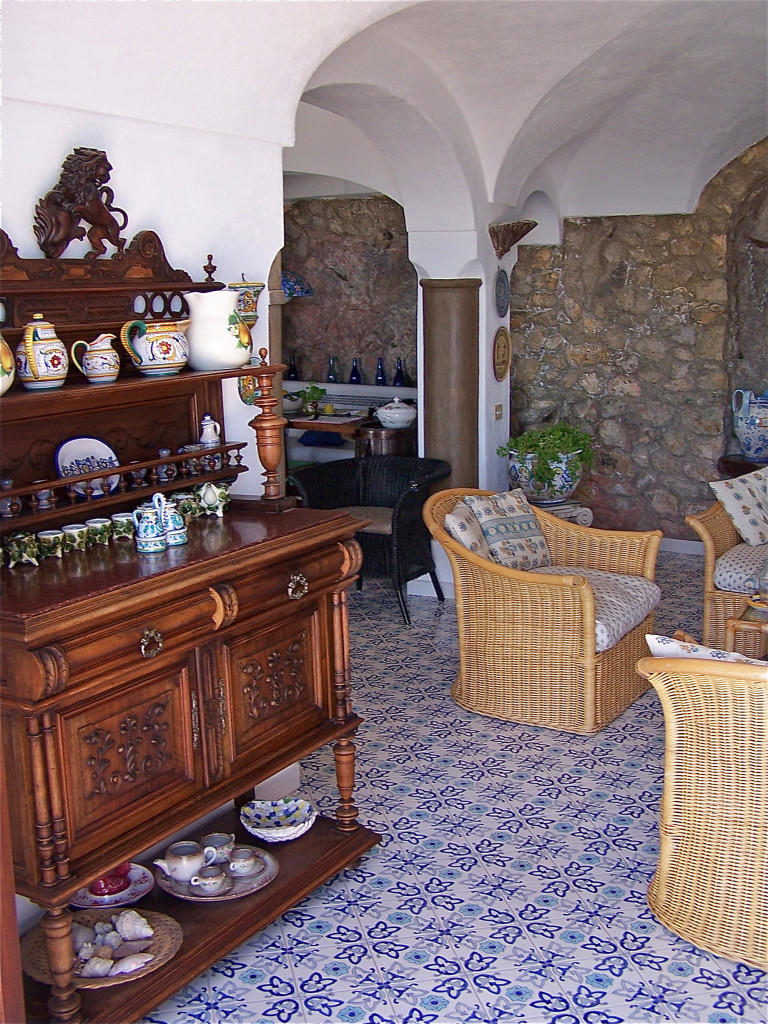 We parked our car on a very small side street and noticed that the drivers side of the cars had no side mirror, and were all scratched up; obviously due to the narrowness of the roads.  Thank God for car insurance!  Every day we traversed the stairs and narrow walk ways from one end of town to another, up the hill side and down to the restaurants and beach.  We also spent hours just sitting on our terrazzo, gazing at the incredible scene that seemed to morph with the light throughout the day.

We found our local grocery shop called Il Tutto per Tutti where we got to know the owner quite well.  One day I felt like cooking a simple pasta for dinner (I think to avoid another climb of the stairs) and went to pick up the ingredients.   He was out of fresh basil, but seeing my distress he held up a finger and said “momento, momento”.  He disappeared for a couple of minutes and came back with a whole basil plant, fresh from his garden! 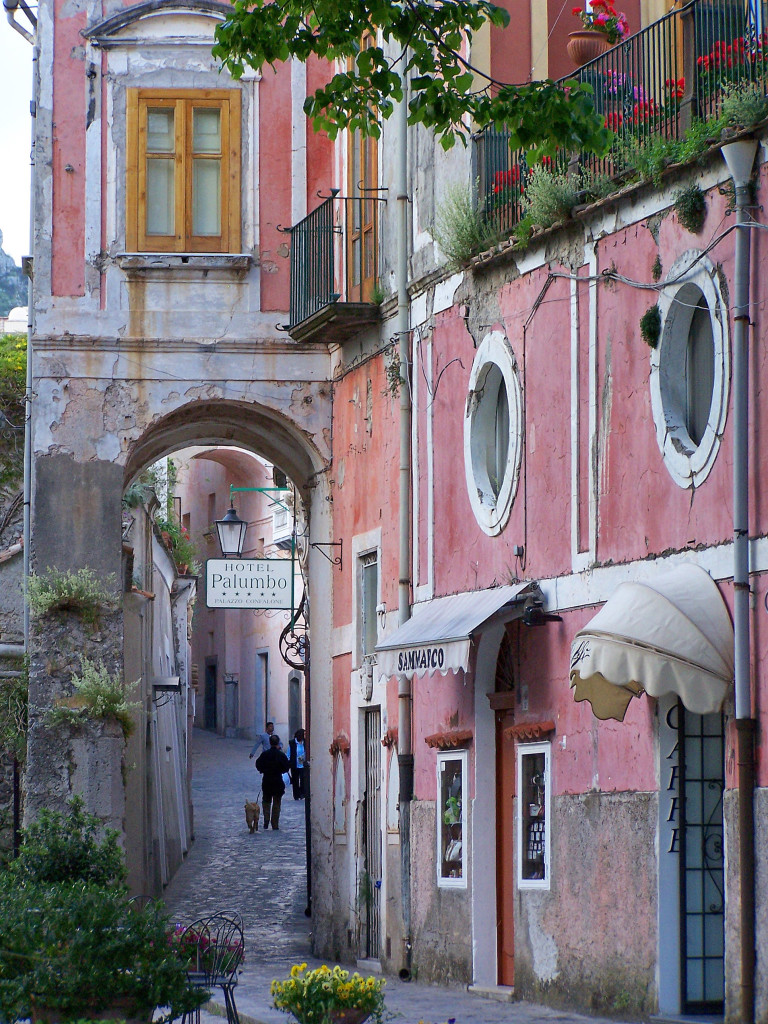 a street in Ravello-image via Irene Turner

We also drove along the coast to explore the towns of Amalfi, Positano, Ravello and Vietri.  And, I think that driving was the biggest adventure.  The roads were so windy that you couldn’t see what was coming around the next curve.  Once we had a large tour bus coming towards us.  We pulled the car up and hugged the cliff on the passenger side so close that I had to pull in the side mirror so as not to have it knocked off.  As the bus driver inched his way around us, he stopped, looked at Ron and motioned to him that he had to straighten the front wheels of our car…that’s how tight a squeeze it was to get by us.  Understand that on the bus side of the road, the cliff fell straight down to the ocean!

To see more pictures of this fabulous part of Italy, check out the video slide show below.

Have you been to Italy, or would you like to go?  Why do you think Italy is such a draw for us here in America? Leave me a comment, I’d love to know!  Ciao for now…