Milton’s Secret is a movie in the making. In partnership with Eckhart Tolle, well known best selling author and spiritualist-Barnet Bain, an award winning producer, director, and author including Academy Award winner for What Dreams May Come, and Stephen Huszar, a producer and partner of Hulo Films. Milton’s Secret will be a part of a new genre of movies called Transformational Entertainment. 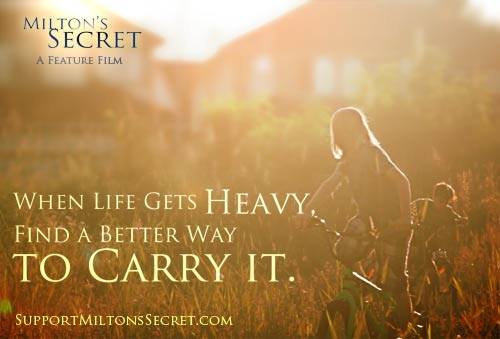 Those making this movie have found it to be a challenge to raise the money and stay on purpose with their script in the current Hollywood paradigm or studio system, in a way that stays true to the values of this story. So they went outside the Hollywood Box to get their funding.

They have received part of the money needed through private investments and grants, but not enough. So they have had to look to other sources such as crowd funding and donation’s from people like us to complete their mission.

That mission…to create a movie with the power to transform consciousness. It’s no secret that our world is going through a transformation on many levels, so I believe that transformational entertainment, with the creed to “create entertainment that empowers people for social change”, is crucial.

This movie is no tutorial. “It is an entertaining family drama, one where people of all ages will walk away with coping skills for keeping curiosity, compassion, and enthusiasm alive. It is a story infused with practical tools that enable children and parents alike to manage stress and to pay attention to what really matters amidst the frantic pace of life… to be captivated by what really matters.” What’s happening Now.

To paraphrase a great man, “We can be the message we wish to see…”

If you are interested in alternative entertainment with a spiritual bent, you can learn more about it and contribute to the campaign here: Indiegogo crowd funding campaign.

Won’t you chip in? Even $5 helps…I did, anything to help in our transformation, don’t you think?